Based in Branson, Missouri, Myer Hospitality is one of the reasons the area is well-known as a great family vacation destination: family owned businesses. The Myer family is successful in one of Branson’s largest industries, lodging.  Carroll and Janice Myer, founders of Myer Hotels, began a hotel career in 1967 when they purchased their first motel in O’Neill, Nebraska. For the next several years they learned about the lodging business before selling the motel and returning to Iowa to continue farming. That change didn’t last long.

In 1972, Carroll and Janice bought their first property in Branson, the Branson Motor Court. The motel remains today in much the same fashion it did then. The motel was sold.  The family moved and purchased an independent motel in Rolla, MO. The Myer family continued to develop in the motel business with a move to Julesburg, Colorado where they owned a Best Western, their first branded hotel. Drawn back to the Ozarks, they moved to Arkansas in 1976

Carroll had a goal of owning a 100-unit property. He succeeded when they purchased a 100-unit Ramada Inn in Harrison, Arkansas. With a commitment to quality, cleanliness and overall excellence, in 1978 the Myer’s Ramada was named the best Ramada Inn in the country. The family owned the property for 12 years, during which time numerous stars visited, including the King of Rock-N-Roll himself, Elvis Presley.

The 80s – Arkansas and Missouri

Carroll and Janice Myer were helped by their three sons who grew up learning the lodging business. Other hotels were purchased in Mountain Home and Fayetteville, Arkansas. Despite their success in Arkansas, something continued to pull the family toward Branson.

In the early 80s, Carroll and Janice purchased the Best Western Knights Inn (currently the Best Western Center Pointe Inn) in Branson. One of their sons, Gail, and his wife, MaryAnn, became the managers.

The 90s Committed to Branson

The Myer family focused on the Branson facility adding over 70 new rooms, an indoor pool, sauna, hot tub, exercise room, game room and converting the onsite restaurant to a Country Kitchen (now Montana Mike’s Steak House).  With Branson developing into a top tourism destination, the Myer family committed to the unique town and its hotel industry. All their hotels in Arkansas were sold and in 1992, the family opened a new Comfort Inn overlooking the 14th hole of the Thousand Hills Golf Course. Another of Carroll and Janice’s sons, Chris, became the Assistant Manager of both the Best Western Center Pointe Inn and the Comfort Inn at Thousand Hills.

The Myer family continued to grow in the industry and opened another hotel in 1993. The Best Western Music Capital Inn was built on Shepherd of the Hills Expressway across from the Shoji Tabuchi Theatre. Son Chris Myer became the general manager of this hotel at the age of 22.

In 1998, they stepped out again and purchased the Cinnamon Inn, also on Shepherd of the Hills Expressway. The hotel is ideally located as the closest hotel in Branson to Silver Dollar City and Shepherd of the Hills Homestead. The hotel opened May 1, 1998 and in 1999 underwent a complete renovation with numerous enhancements to change to a Rodeway Inn. Then in 2002, the property upgraded again to a Comfort Inn.  In 2016 it was repositioned to a Quality Inn after another complete renovation.

In October 2001, the Myer family opened the Comfort Inn & Suites Branson Meadows. The development marked the first hotel construction in Branson since the mid-90s and was completed in first-class fashion. The hotel offers guests a beautiful mountain lodge theme and an amazing million-dollar view of both the Ozarks Mountains and Branson area.  The hotel has gone on to become the most awarded Comfort Inn in the history of the Comfort Inn brand with 5 Hotel of the Year awards and numerous Platinum awards.

In December 2009, the Myer family completed acquisition of the Holiday Inn Express on Green Mountain Drive in Branson.  This property offers a more contemporary decor and is conveniently located in Thousand Hills on Branson’s Yellow Route–just a block off the famous Highway 76, Country Music Boulevard.

While operating six hotels in Branson the Myer family is currently focused on continual improvement within those properties. Each year during the off-season, projects are undertaken to enhance, remodel or add on to Myer Hotels.

“We don’t believe in letting our properties sit still,” said Carroll Myer. “To be the best you can’t fall behind. You’ve got to continually improve, change styles and exceed customer expectations.”

While hotels are still the core of the business, over the years the Myer family has seen the need for other products and services that would help improve guests’ vacations.

iBranson Ticket Services and ibranson.com started in 1994 providing quality ticketing services without the service and delivery fees of other ticket companies. Today, the company has developed some of the best destination management software in the country.

A restaurant marketing division was created over 10 years ago and now includes The Flavor of Branson, Taste of Branson, The Dish, Branson restaurant map and bransonrestaurants.com. These publications help visitors make better dining decisions.

Chris Myer formed a new company that now manages Branson Segway & Adventure Center. In 2016, the company took over the management of Branson’s Gift of Lights, a Christmas lights drive through located near Sight & Sound.

Today, Carroll and Janice Myer act as advisers and consultants to the company while two of their sons oversee daily operations: Gail is the Vice President of Operations and Chris is the Vice President of Marketing. Along with the outstanding support of management and each hotel’s team members, the Myer family continues to excel in the lodging industry. That is why Myer Hotels is continually recognized with top national awards and honors. It all comes back to the Myer philosophy that the guest is the number one priority.

The Myer story is one of the American dream. Carroll and Janice Myer didn’t have a college education, but they did have the values of hard work and persistence. Their hard work combined with a spirit of hospitality and determination have helped Myer Hotels become one of the top hotel companies in America. 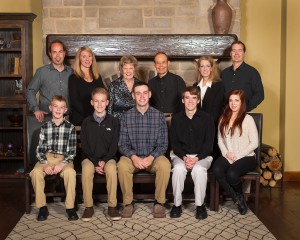